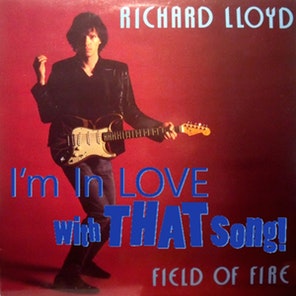 If you know Richard Lloyd at all, it’s either as a member of Television (the first band to play CBGB’s) or as the guitarist on many of Matthew Sweet’s best tracks.  But Richard released some great solo work in between those gigs, including an album called Field Of Fire.  Overlooked & forgotten, this is one of the best records of the 1980’s (in my opinion, of course).  The title song features some of his best ever guitar work.

On this episode, we’re listening to a great rockin’ track called “Backtrack” that’s as close to “classic rock” as Richard Lloyd will ever get– and I mean that in the best possible way.  Keith Richards would be proud of this guitar riff.